^^^Click on Art Gallery to browse the album covers^^^ 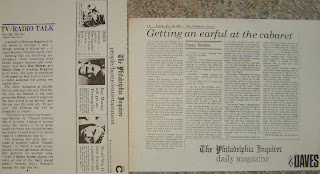 Unknown-ness: I had never heard of these guys until I bought the Beru Revue record. When I was researching them, I noticed that they were related to the Daves through one member. Remembering that I saw this Daves record back at the thrift store, I went back to get it. All I know if that it is probably more revue/acting and poppy music that will come across as silly. Especially when looking at the cover, with the guys bowing to their semi-famous singer. But the back was what turned me off on the first glance at the thrift shop. I did not like the cluttered, cutesy lyrics printed with drawings and different size fonts all over the place. It just screamed complicated for complication’s sake.


Album Review: So it turns out that the singer, before the Daves was famous for graduating Second City comedy troop in Chicago, and appearing, if ever so briefly as the DJ at the prom in “Pretty In Pink.” But beyond that, and on this live record, it would seem that the band mixes performance art with silly pop music to create the following experience, capturing, as close as possible, a version of their live show. I believe the first side are all studio recordings and side two is live.

“Heaven” has a bluesy, bar room rock intro that is quickly taken over by new wave synth. The vocals are not particularly well sung, but as far as I’ve read, that is not the draw of this band. Their live show is something to be seen. Not saying it is a bad song, though. The music consists of a dirty, bouncy feel, and the vocals have a tense energy, and the chorus is theatrically catchy.
“Girlfriends” begins with a children’s xylophone and the vocals sound like a children’s sing-a-long, with the full band adding to the chorus of voices. It is a similar theme and structure to the Blur song Girls and Boys, minus the dance club music. The end of the song changes the theme a little and sounds like it is ready to change gears, but instead it just ends there.
“Saturdays” starts with an orchestral synth that sounds a little like Siouxie Siouxe. And the doom & gloom lyrics are similar to the deeper singer of Shakespeare’s Sister. But as the song picks up and the vocals become more aggressive, it begins to sound like a dark B-52’s song: at least the bass does.
“Boy Oh Boy” reminds me of Butt Trumpet’s song Shut Up, where the vocals are spoken, and then the music comes into the background, and cuts off the singer. But after the short spoken introduction, the song grinds out like a Joan Jett or a Missing Persons song. The guys in the band form the theoretical band that sing back to Bekka. It is a call and response stage performance. The song ends with the guy choir chanting about how bad they are.
“Where Will I Love When I Die” had an emotional vocal beginning, and it party cutsey and part clawing she-devil. The song, musically, is built on lots of little repetitive pieces. It never flows freely, but it staggers along disjointed like Morse code. The music begins to swirl around and sounds like a chorus of shrieking ghosts caught in the wind also surfaces toward the end, until the vocals metaphorically accept their passing, and the song ends contently and positive.

“Sit On My...” begins the live performance side of the album. You can tell there is a bit of a difference, a bit more echo on these live songs, not to mention the obvious crowd interaction. But Bekka’s vocals sound even more aggressive and deeper than on the studio tracks. This song is a fast paced rock song with repetitive guitar sections and in the musical breakdown, she introduces the audience to the album, and does some call and response vocal nonsense with the audience. The talking and manor of her vocals reminds me of the sax playing singer of Mika Miko. The song transitions right into the next track.
“Your Heart Is Mine” begins with a rushed drum beat and ‘tween song audience applause and whistles. Then guitar effects are added and the song begins to take on a feel of Bow Bow Wow. The chorus is very catchy, repetitive and fast, and reminds me again of Joan Jett. The end of the song features Bekka scatting to the music a bit.
“How Sad” begins with an on stage performance of the singer interviewing for a job and getting it all wrong. She is supposed to read copy for some vocal audition. Then the music fills in as she reads the copy about a bad day in the office. The song begins proper then as a slow ballad. It has a dreamy melody and the vocals do eventually pick up in emotion, like Heart’s “Magic Man”. This is a dream pop, shoe gazing ballad.
“Bobby An' Marie” begins with applause from the last song, and this story folk-rock song is a bit of quick singing over oldies Honky-Tonk piano rock, something between “Great Balls Of Fire” and Chuck Berry’s “You Never Can Tell.”
“Walking After Midnight” Is the next song as the crowd chatter bridges the gap. It is a slow and sexy bluesy swagger. Her vocals do get aggressive, like Alannah Miles in “Black Velvet,” but they settle back down into the wispy Monroe or Peggy Lee’s “Fever” sexiness.